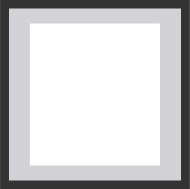 A. Non Canonical Binding Peptides Peptides to MHC Class I - New Approaches to Vaccine Design
1.   MHC class I, H-2Kb, in complex with, MUC1-8 peptide expressed on adenocarcinomas - x-ray crystal structure. Low affinity peptide
binding. Novel peptide design for cancer vaccines. Journal of Molecular Biology, 2002, pdf
MUC1 is a high molecular weight glycoprotein overexpressed by adenocarcinomas. We have been using mannan-MUC1 for the selective delivery of MUC1 peptides to the class I pathway. MUC1 peptides are presented by a variety of class I molecules and can generate CTLs. We have described the 9mer epitopes presented by different H-2 class I molecules and by HLA-A2. For the most part, the 9mer peptides have unusual features in that they lack defined anchors and bind with low affinity. Nonetheless, high avidity CTLs are produced. We also noted that MUC1 9mer peptides were not essential as 5-8mer peptides could also bind. In addition to VNTR peptides, several mutations and mimics have been generated. This approach leads to the generation of more powerful anti-MUC1 CTLs. The MUC1 peptides have other novel features. They bind in an unusual fashion, in that the mid and C-terminal regions loop out of the groove more than other peptides and are accessible to MUC1 antibody while the N-terminus is buried. Indeed, MUC1 peptides are the only peptides which are accessible to antibody while in the groove of class I molecules, although other antibodies can react with peptide/MHC molecules or with a MHC dependent configuration. The results clearly indicated that MUC1 is binding in an unusual manner. X-ray structural studies of MUC1 peptide (SAPDTRPA) in complex with MHC class I H-2Kb, demonstrate that the side chains of the amino acids pointing into the pockets are small and the pockets are not completely filled as compared to the high affinity peptide SIINFEKL. This accounts for the low affinity binding of SAPDTRPA peptide to class I. We also have the structure of a peptide SRDHSRTPM, also lacking anchor motifs, but still has high affinity at 25°C, but provids little thermal stability at 37°C. The amino acid arginine at P6 pushes the peptide out of the groove in the central region. The studies demonstrate that peptides do not have to be deeply bound within the groove of Class I molecules, indeed low affinity binding peptides can generate CTLs. Thus, a different mode of peptide binding occurs which may have implications in immunity, and in tolerance induction. 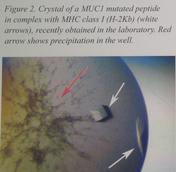 4.    Use of GalNAc for high affinity binding. Proceedings of the National Academy of Science USA, PNAS, 2003

Designing peptide-based vaccines for therapeutic applications in cancer immunotherapy requires detailed knowledge of the interactions between the antigenic peptide and MHC in addition to that between the peptide-MHC complex and the T cell receptor. Past efforts to immunize with high affinity tumor-associated antigenic peptides have not been very immunogenic, which may be attributed to the lack of T cells to these peptides, having been deleted during thymic development. For this reason, low-to-medium affinity non-canonical peptides represent more suitable candidates. However, in addition to the difficulty in identifying such antigens, peptide binding to MHC and hence its ability to induce a strong immune response is limited. In order to enhance binding to MHC and improve immune responses, anchor modifications of non-canonical peptides would be advantageous. In this study, the non-canonical tumor associated peptide from MUC1, MUC1-8 (SAPDTRPA), was modified at the MHC anchor residues to SAPDFRPL (MUC1-8-5F8L) and showed enhanced binding to H-2Kb and improved immune responses. Furthermore, the crystal structure of MUC1-8-5F8L in complex with H-2Kb was determined and revealed that binding of the peptide to MHC is similar to that of the canonical peptide OVA8. Lazoura and Apostolopoulos et al
Peptides bind MHC class I molecules by anchoring hydrophobic side chains into pockets in the peptide binding groove. Here, we reported an immunogenic (in vitro and in vivo) MUC1 glycopeptide (MUC1-8-5GalNAc) bound to H-2Kb, fully cross-reactive with the non-glycosylated variant. Molecular modeling showed that the central P5-Thr-GalNAc residue points into the C-pocket and forms van der Waals and hydrogen bond interactions with the MHC class I. As predicted, GalNAc, modified peptide carrying an additional anchor in the central C anchor pocket, increased the affinity by about 100-fold compared to the native low affinity peptide (MUC1-8). The findings demonstrate, for the first time, that glycopeptides associated with MHC class I molecules can make use of GalNAc to anchor the peptide in the groove and enable high affinity binding. 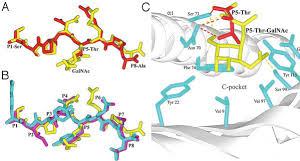 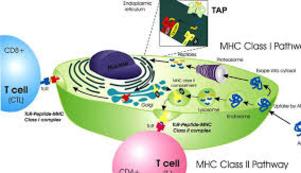 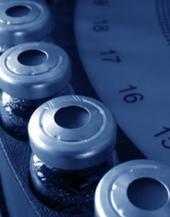 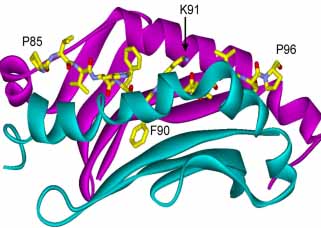 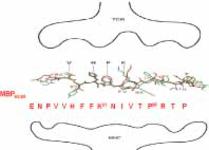